Welcome to the Guild of Craft Soap & Toiletry Makers

The Guild of Craft Soap and Toiletry Makers (GCSTM) is a non-commercial peer support network which provides information and guidelines about handmade soap crafting and the EU legislation that regulates the cosmetics and toiletries industry. GCSTM is run by volunteers who give their time freely for the benefit of both our members and the profession as a whole. The Guild operates an open admissions policy and membership is FREE to any soap or toiletry maker who holds safety assessments for their product range.

1. To raise awareness of the legislative standards that are in place that apply to craft soap and toiletry products – specifically EU Regulation 1223/2009 (Cosmetics Regulation)

2. To register as members of the Guild crafters who work in compliance with this legislation and who hold relevant public liability insurance

It is not generally known that in order to legally sell a crafted soap, toiletry or any other cosmetic product within the European Union that it must meet legislative guidelines. The reason for this is public safety. The same legislative standards applies to imported products. The legislation in question was previously known as the Cosmetics Products (Safety) Regulations, since replaced by the new EU Regulation 1223/2009 (Cosmetics Regulation) which has been in force since 11 July 2013. 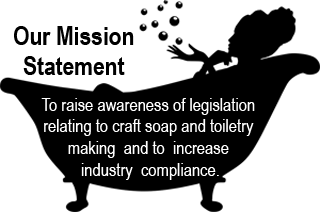 A major reason for the existence of the Guild is to raise awareness of the Cosmetics Products (Safety) Regulations. Because of this we are not currently accepting applications from crafters in areas where the legislation is not in force. This is a practical policy decision only and should not be viewed as a reflection on the quality of crafts produced by manufacturers outside the European Union.

The legislation sets standards. It aims to ensure that every ingredient in hand-crafted soap and toiletry products is safe to use. Some ingredients are banned because they’ve been found by scientific testing to be potentially harmful. Other products are banned or restricted because they are potential allergens. The aim of the legislation is to protect the general public and the craft soap and toiletry maker.

Who Can Join the Guild?

The Guild is free to join and is open to any EU based craft soap and toiletry maker who can demonstrate that their products have been safety assessed and approved for sale by a chartered chemist or other approved person as defined by the EU Regulation 1223/2009 (Cosmetics Regulation).